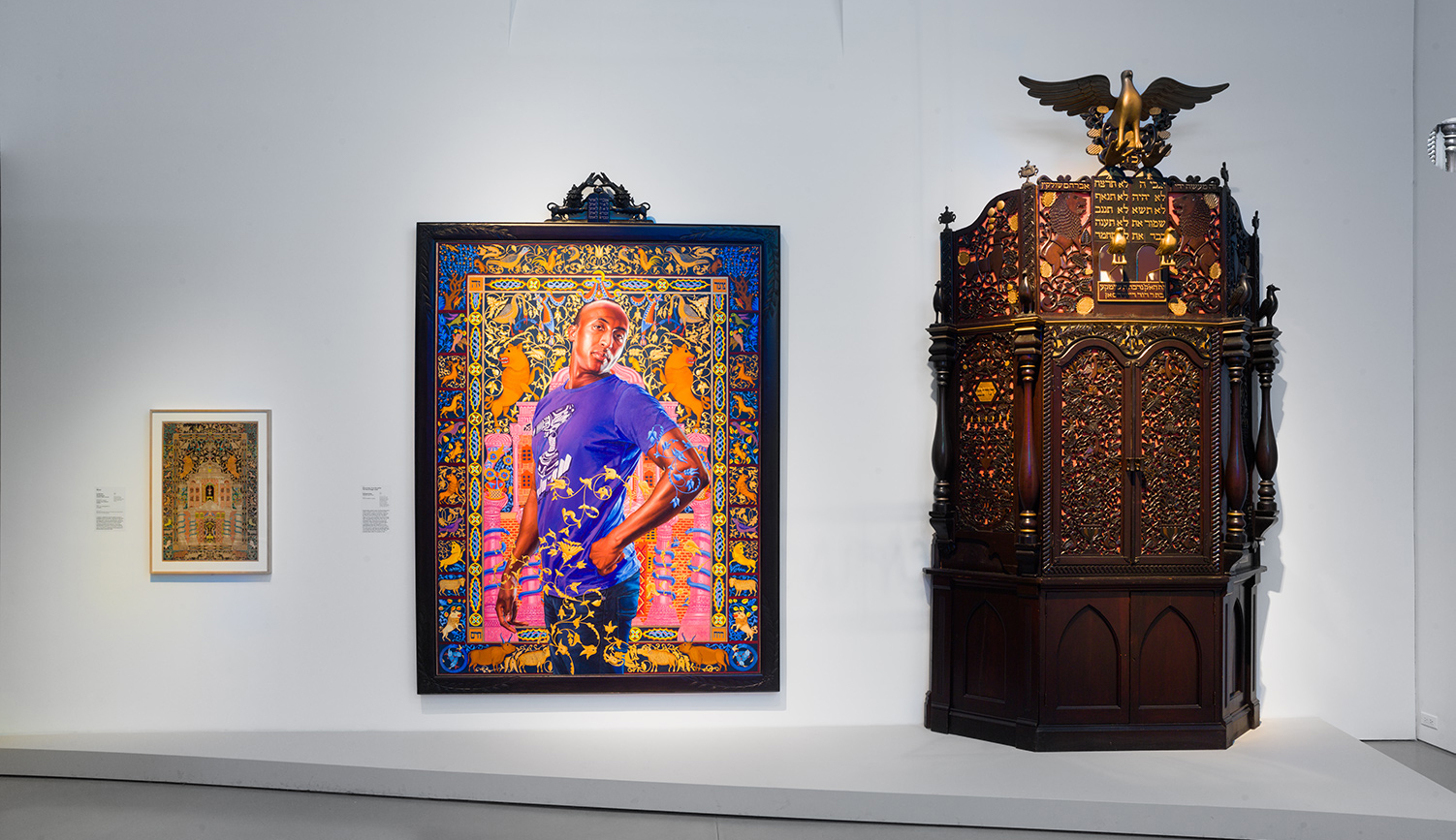 The V&A Museum has an interesting collection of items related to Jewish worship including many artifacts used during festivals such as Purim, Passover and Hanukkah. Items relating to the Sabbath are discussed in another article: Judaica in the Collections of the V&A Museum.

The Festival of Passover

The eight-day festival of Passover, or Pesach, is one of the most important festivals in the Jewish year, marking the Jews' escape from Egyptian enslavement. The exhibition includes a German pewter Seder Plate dating from 1764. Plates of this kind are central to the festival meal, known as the Seder (meaning 'order').

This Seder plate is densely decorated. At its centre is a lamb, representing the lamb sacrificed at the first Passover, the evening of the Jewish exodus from Egypt. The lamb is surrounded by an eight-pointed star and numerous images including deer. In Jewish art, the deer, with its quick movements, symbolises the speed with which the word of God spread throughout the Jewish world.

The plate bears several inscriptions, some in Hebrew, others in Yiddish (Judeo-German). A popular Passover song, 'Chad Gadya, Chad Gadya' – 'One Kid for Two Zuzim' is also illustrated. (Zuzim were ancient Hebrew coins.) The song tells the story of an old man who is counting his money, trying to decide whether or not to sell his goat.

Hanukkah (also spelled Chanukah), means 'dedication', and the V&A's display includes several Hanukkah lamps, showing the different styles in use at various times. Many are lavishly decorated with centaurs, cornucopia and lions. This English Hanukkah lamp was manufactured by Jacob Marsh, a London silversmith, in about 1747. The lamp is decorated with shells and scroll, typical of the Rococo style of the mid-18th century.

Hanukkah, the festival of light, commemorates an event in 165 BC, when Antiochus Epiphanes, ruler of the Seleucid empire, ordered his army to desecrate the temple in Jerusalem and forced Jews to worship Greek gods. In 166 BC Judas Maccabeus led a Jewish rebellion, reclaiming the temple. They relit the temple menorah (the seven-branched candlestick) but had enough oil for only one day – miraculously, that oil lasted for eight days.

The eight-day festival of Hanukkah has been celebrated ever since during November/December – Jewish calendar: 25th Kislev.

Purim – Celebrating the Story of Esther

This is a cheerful festival with fun, games and dressing up. It commemorates Esther, a young woman who saved Jews living in Persia from extermination.

During the festival the Megillat Esther, the Book of Esther, is read and Jews are commanded to donate money to the poor. The V&A display includes a silvered pewter Purim plate used for the collection. The plate is engraved with elements from the story of Esther, including inscriptions from the Bible: “and of sending portions one to another, and gifts to the poor” (Esther 9:22). Other inscriptions, in Yiddish, record the names of Esther and King Ahasuerus (also known as Xerxes) as well as the owners of the plate, Lieb of Gelbach and his wife Pessele Auerbach, who lived in Rome.

The V&A exhibition features many more items of Jewish interest and is located in the Rosalinde and Sir Arthur Gilbert Galleries. More information can be obtained from the V&A Museum.