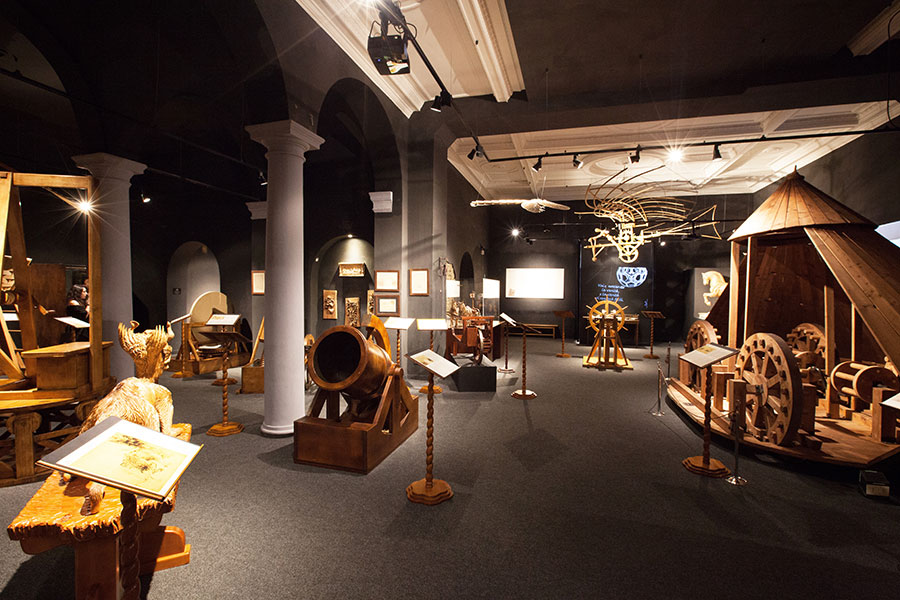 The small village of Vinci in Tuscany, birthplace of Leonardo, houses the museum that showcases the machines, clocks and instruments that the artist and scholar designed.

The small town of Vinci, perched on a hilltop overlooking a typical Tuscany landscape of olive groves and vineyards was the birthplace of one of the most famous artists and scholars of the 1400s. As well as a painter, Leonardo was also an engineer and an inventor, although his inventions often “modernised” the work of earlier great men.

Located in Two Buildings – a Palace and a Castle

The museum is housed in two separate buildings that are close together – the Palazzina Uzielli, and the Castle of the Guidi Counts, which dates from the Middle Ages. The museum and the adjoining library – the Biblioteca Leonardiana – is devoted almost entirely to Leonardo the engineer and inventor, rather than Leonardo the artist. The Library, opened in 1928, contains facsimiles of all the drawings and manuscripts, housing over seven thousand books in several languages.

But the mechanically minded will head straight to the other rooms. There are over 60 scale models of many of Leonardo’s machines filling the rooms and the display cases. Each of the models comes complete with references to the specific drawings and notes Leonardo made about them. Hanging overhead are the famous flying machines, and kites. There is also the self-propelled “car”, and machines of war, such as the ship with the reinforced bow for ramming enemy boats – it also had a cannon concealed within its decks. Clocks, screws, intricate geometric shapes, valves, presses, cranes and machinery devoted to the textile industry can all be seen.

The other room is devoted to the replica of the hoist that was designed for the construction of Florence Cathedral. The hoist, suitable for lifting medium weights, could be used in a variety of ways. This model, which actually works, is to a scale of 1:2 and can be viewed from ground level or from the top looking down.

Sculpture of the Mona Lisa

There aren’t that many of the master’s artworks on display, but for lovers of paintings, there are some paintings “from the school of” in a private gallery housed in the cellar of the castle. One of the most outstanding exhibits is the model of the Mona Lisa, complete with the enigmatic smile, rendered in gleaming white marble.

The museum and gallery are beautifully set up, with a guide booklet in English available from the ticket office. It clearly explains all the models, which are numbered for ease of finding the information. There are also English language leaflets available in the rooms that explain various machines, such as the hoist and the crane, in more detail. There’s also an educational room where you can view videos, or do various crafts activities associated with Leonardo’s work.

Other Memoirs of Leonardo

The town of Vinci itself is also packed with references to Leonardo. In the central Plaza there’s a bronze statue of a horse. Nina Akamu was inspired by the many horse drawings of Leonardo. There’s also a wooden sculpture of Mario Ceroli – the famous figure inside a sphere – the Vitruvian Man. And the energetic can walk three kilometres along country roads to Anchiano, and view the house where the artist was born.