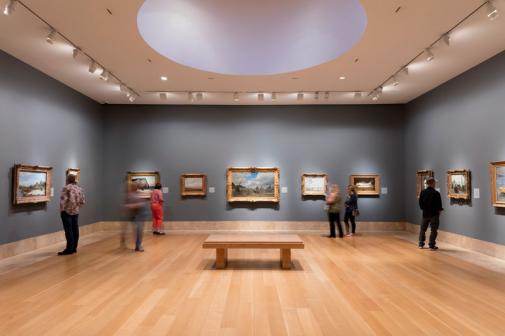 There were a lot of significant artifacts that viewers are able to see on display at the Norton Simon Museum in Pasadena, California. The museum, located on 411 W. Colorado Boulevard, has numerous ongoing exhibits, but perhaps the most impressive is the collection of Indian art.

Most of these pieces of art have to do with Hindu gods. One of the most elaborate pieces is called “Temple Wall with Scenes of Krishna’s Life.” It is painted wood that was created in Kerala, India sometime during the 18th century. At one time the piece formed a wall for temporary use in Hindu temple ceremonies. The main god displayed in the piece is Vishnu. He is one of the most important gods in the Hindu religion and many works of art are based on him. In this particular one, Vishnu disguises himself as two alternate personalities, Rama and Krishna. At the top of the wall is a kirrttimukha or face of glory. This creature looks like a lion, and it is usually placed above doorways to protect those that are faithful to the gods.

Vishnu is also seen in a piece called “God Vishnu with Personified Attributes,” which was constructed in India during the 800’s. He is usually blue in works of art to represent the ‘color of infinite space,’ because he is so powerful and omnipotent.

There are many watercolors on display that represent Vishnu’s avatars, including “Marriage of Krishna and Rukmini” from 1800, “Krishna the Butter Thief” from 1725, and “The Death of the Ogress Putana” from 1675. There are also bronze figurines of many Krishnas dancing that were completed in the 1000’s. Other pieces of art were made out of various materials like chlorite, marble, sandstone, granite, and brass.

There are many symbolic layers in the works of art on display. For example, there is a piece called “Railing Pillar: Goddess and An Amorous Couple” that was made in 100 BCE. The women in the piece are holding mangos because the symbol of fruit represents fertility. There is another work called “Servant Goddess of Revati” that was made in the 4th century. She was revered for her association with water and she guarded the treasures that were found in the water.

Another recurring element is of the character of the god, Ganesha. He is an elephant who is always pictured with sweets in his hand, because he loves to eat. In fact, the story goes that he loved eating so much that he ate until his stomach burst. The moon was laughing at him, so he threw one of his tusks at the moon; therefore, in most depictions of Ganesha, he only has one tusk. Most of the bronze figurines do display Ganesha with only one tusk. Ganesha is supposedly the remover of personal obstacles because of his trials in fighting with the moon.

Although the museum’s collections offer insights into many cultures and religions, it is the pieces that concentrate on Hinduism that are the most impressive. For more information on the museum, visit www.nortonsimon.org or call (626) 449-6840.