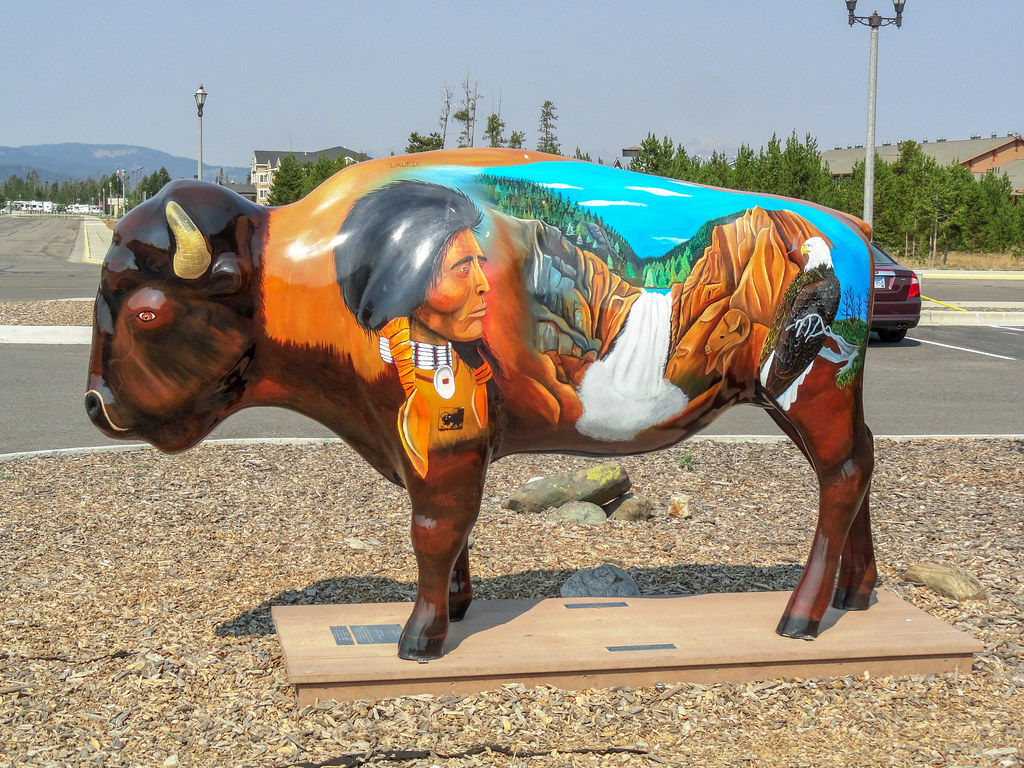 Buffalo not only roam the meadows and forests of Yellowstone National Park, but they also roam the streets of nearby West Yellowstone, Montana.

While Yellowstone National Park requires you to keep at least 75 feet away from the live national treasures, in West Yellowstone you can get as close as you want to these buffalo, even touching them if you want. That’s because these buffalo are fiberglass, each painted with a different scene that tells a colorful story about the Yellowstone area.

Eleven buffalo roam West Yellowstone today, down from a herd size of 27 cows and 10 calves. Those other buffalo are still in existence, it’s just that they’re roaming the range elsewhere.

Origins of the buffalo project

The Buffalo Roam project started in 2006 as a fundraiser for the fledgling West Yellowstone Economic Development Council. Another aim of the project was to raise the community’s awareness of artistic expression. In an area where artists and wildlife photographers abound, the painted buffalo certainly did that.

According to the council’s website, Montana artist Joe Halko created the buffalo cow model, which was then developed into a mold by Fiberstock, Inc., located in – where else – a town called Buffalo in Minnesota. The next year, 10 buffalo calves were made.

Twenty-seven fiberglass buffalo cows were made, and then artists in four states submitted bids to paint scenes on them. Using the fiberglass molds as their canvas, artists painted scenes depicting Yellowstone National Park, historic West Yellowstone or regional Native American tribes. Local sponsors each donated from $3,000 to $10,000 to get the project off the ground.

In 2007, the painted cows were unveiled to the public with the calves coming in 2008. The painted buffalo were displayed around West Yellowstone until August 2009 when all were moved to the grounds of the Yellowstone Historic Center Museum. At the end of that month, they were auctioned off, raising more than $161,000 for community and economic development projects in West Yellowstone.

The buffalo sold for anywhere from $2,000 to $17,000 each, according to a September 3, 2009, news release from the West Yellowstone Chamber of Commerce. After the auction, the buffalo traveled to their new homes in 10 states, with one going as far away as New York.

Not all the buffalo left West Yellowstone, the major gateway to Yellowstone National Park. The 11 that remain in this small town are located mainly along Yellowstone Avenue.

While you're at it, why not explore some of the other attractions West Yellowstone has to offer.